I Just read in bb's blog DSP's statement about Hyun Joong, thanks a lot bb for sharing this in your blog ! .. I quote :

On the 7th, he was suppose to take the 12pm flight back to Korea when he was suddenly down with a high fever in the morning. He was sent to the hospital and was diagnosed with influenza (H1N1).

Kim Hyun Joong is now is having treatment in one of the hospitals in Japan. The local doctor has given him tamiflu and his condition has turned better. From now onwards, he will need to take a good rest in order to recover.

DSP Media related parties and manager are with him checking on this condition. Once his conditions become better, they have the intentions to bring him back to Korea. 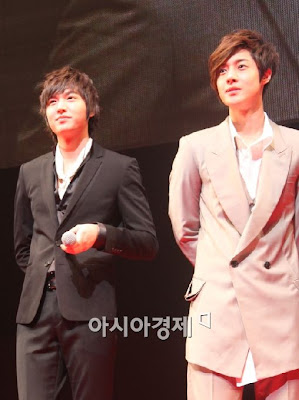 So he was already sick with it at the events, no wonder he looked more quiet than usual in Malaysia and Japan...except when performing songs with SS501. It's possible Young Saeng is also being quarantined in Japan. We didn't see Young Saeng and Leader coming back to Korea, right ? At least I didn't see it in every site I went to...I didn't blog about it though...I only saw Jung Min, Kyu Jong and Hyung Joon in Liezle's blog.

Kim Hyun Joong FIGHTING....we know you can do it.

You've got a lot of spirit and you've been through difficulties before...

I'm imagining Hyun Joong like he is below...full of spirit !! 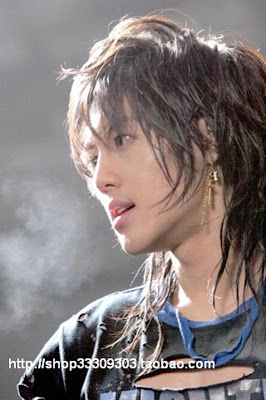 And now I'm really stealing a big part of shockimpulse's post in Allkpop !! Oh so sorry...I can't help it, feeling so sad over Hyun Joong . Here are quotes from shockimpulse's breaking news :

A representative from DSP Media gave a formal statement saying, "Scheduled for a flight, at 12pm on the 7th of September, he had passed through immigration without any problems but later in the afternoon, due to a sudden change to his health, he was taken to the emergency room."

While in the ER, it was diagnosed that the star has swine flu, and the representative says that the star is being treated but has to remain under further observation to make any other report, thus causing him to remain in Japan. Kim Hyun Joong's manager has been sent to the hospital to check on the matter and will inform the public with more details when available

myoce said…
He he Tamar....yep I agree !
They ought to try that...since it is so beneficial.The Tamiflu ..hmm ....it's still controversial.

Don't know about Asian/tropical countries though...isn't the vit D level in people here suppose to be higher? Since we don't have winter, like here and Malaysia.

The virus could have adapted or mutate [much like " The Borg " ].