News about SDA and BOF from Allkpop 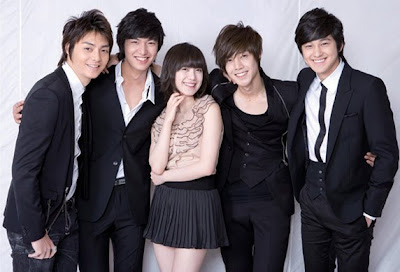 Organizers of the Seoul Drama Awards 2009 with Yahoo Korea opened a poll for users from around the world, to find out the most popular drama, actor and actress in the past year. The poll was held between 13th July and 30th August.
Thanks to his SS501 background and popularity as Yoon Ji Hoo in KBS2TV Boys Over Flowers earlier in the year, Kim Hyun Joong walked away as the most popular actor with 48% of the votes. Lee Junki came in second with 26% for his Iljimae role while fellow Boys Over Flower star, Lee Minho was placed third. For the most popular actress Goo Hye Sun came in third for Boy Before Flowers. In the most popular drama category, Boys Over Flowers won with 38% of the votes.
The 2009 Seoul Drama Awards ceremony will be held on 11th September, at the Olympic Hall in Seoul's OIympic Park.


We did it Hyunnies ! I'm glad I put the poll's link in my blog previously. Alot of things influence the votes, I think...not only pure acting skills is taken into consideration in these kinds of polls. I think Hyun Joong will work harder in his acting skills after this....he knows his limitations better than we do.

About Boys Over Flowers, here's the news from Allkpop:


The main cast of Boys Over Flowers, Lee Minho, Kim Hyun Joong, Kim Bum and Kim Joon will be in Yokohama, Japan this weekend, 5 - 6th September for promotions and promote their Story of Four Flower photo book.

SS501 was originally scheduled to appear for the 6th September event. But they will now be added to the line-up for 5th September as well. According to organizers, "SS501 leader, Kim Hyun Joong was in the drama itself and there were lots of strong demands from Japanese fans as well, so we decided to add SS501 to the earlier event as well."

Organizers said that tickets for the 6th September fanmeeting was already sold out while sales for the 5th September event are fast selling out, after SS501 was added to the line-up. SS501 have just completed their DVD filming and fan signing in Malaysia on 3rd September and will fly straight to Japan soon.