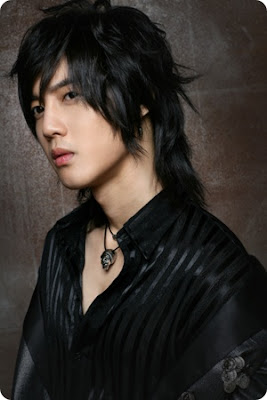 I'm really sad to hear that Kim Hyun Joong is hurting because of the terrible criticism and hate [bashings] he has received over the fact that he attended Korea's ex president, Jun Doohwan's birthday party....when in fact he wasn't invited to the party, but was there by coincidence.

First I couldn't understand why SS501 Leader had posted an entry in DSP website, the content revealing how very hurt he is by all the hate. I read some more and found out that Jun Doohwan is one of Korea's most hated president, he did terrible things in his presidency term, but the terrible things he did should not be blamed at Hyun Joong, he was not invited but had to go along with his CEO out of respect...he wasn't showing support for the ex-president.

Here I'm putting excerpts from an article by Johnydorama in Allkpop :

Kim Hyunjoong is apparently deeply hurt from all of the harsh criticism and hate. On the 19th, DSP Entertainment had stepped in to release a statement on their website and clear his name.

“January 18th was the birthday of DSP Entertainment’s CEO, Lee Ho Yeon. Aside from Jungmin who was filming for ‘Human Theatre 2010′, the CEO and the rest of the members had an appointment to eat dinner together. Hyungjoong had another meeting prior to this dinner, so after that meeting, he met up with CEO Lee Ho Yeon to travel together to the dinner location. On the way there however, Lee Ho Yeon received a call from the ex-President’s party, requesting that he drop by. Upon the request, they stopped by prior to heading out for their dinner party.”

Basically, DSP Entertainment is stating that Kim Hyunjoong had no choice but to stop by because DSP Entertainment’s CEO, Lee Ho Yeon, had to make a stop at Jun Doohwan’s celebration. In other words, Hyunjoong was there by coincidence, since he was with Lee Ho Yeon.
If you'd like to read the whole article please click here

If you'd like to read Hyun Joong's message in DSP web site and some discussion on this incident, click here

I was too late knowing about the messages in Perfect and didn't direct you to Liezle's blog, but it's heart warming to see there were more than 1200 reply messages there to be put up in Perfect website supporting Hyun Joong. Liezle said the total is about 2500 messages !]. My melchan ran out of her lair and posted her support also once I told her about what happened ^^

I hope our gesture of support, the strong brotherhood of SS501, and the love of his family will carry Hyun Joong through this, to emerge a stronger and better man...like his sunbae....a certain wonderful Korean performer...Yong Joon ssi.

Dear Hyun Joong, TS believes in you, be strong ...WE will get through this.
Labels: Kim Hyun Joong