Finally, I've arrived at the third dimension, where I'd like to write about Kim Hyun Joong as an actor. Of course I had to do a little digging and a lot of watching Hyun Joong act in previous TV programs [ NOT a problem at all..]. First I watched him in Can Love Be Refilled, only the Hyun Joong cuts with English subs, of course. There are 13 cuts , if you're interested in watching I will put the links later on. In this KBS2 sit com he performed with fellow SS501 member, Park Jung Min... as golfers who compete in sports...and in love. So sorry I don't know the name of the actress who played his love interest, but she reminds me a bit of Choi Ji Wo.....hmmm....and 'Ive always thought Hyun Joong looks a bit like Bae Yong Joon...hmmm, interesting. He did not have a lot of lines here...but he did get to do a lot of exercise :) I thought he did fine ! the right interpretation of the character and situation...correct facial expression and all....but I'm biased and feel soooo happy just to see his face anywhere :) 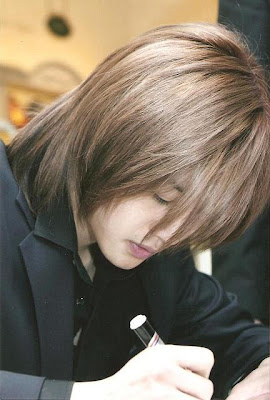 After that I searched for the Nonstop 5 or what ever the program's called there. [ Damo parody ?]..I understand there's some comedy in it? The performers wore period costumes and the men sported long hair....I think he wore a wig, and it wasn't his own black tresses there. Here are the links of episodes I saw, see if you could spot Geum Jan Di......err I mean Goo Hye Sun, in one or two episodes : part one, part two and part three. After watching, I thought he did fine !! ...the right interpretation of the character and situation, correct facial expression and all ...and me very very delighted just to see his face :) 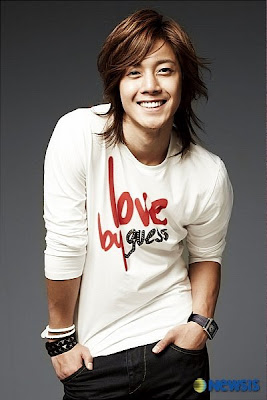 Waaaa......uhh... do you begin to see a pattern here?....Yep ! we can't continue discussing this dimension with me gushing admiration for Kim Hyun Joong every time I finish watching something with him in it !!! Gotta make a fresh start....gotta go about it scientifically [snap out of it, myoce !!].

Oke oke, first I'd like to point out his acting in the Eru's "Black Glasses' MV, I see many positive comments in the internet about it and Hyun Joong was fortunate enough to work with Ahn Sung Ki, a recognized senior actor. In the MV the senior actor was the gangster in dark glasses and hat. 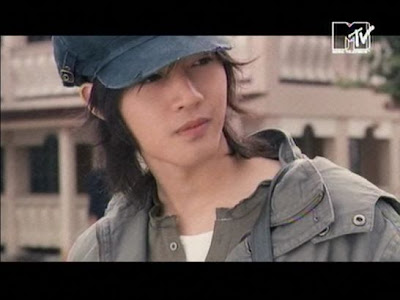 Ahn Sung Ki is known as the National Best Actor in Korea, he has appeared in almost 100 films....and because of his ability to speak several foreign languages, UNICEF appointed Ahn as a representative . You could say that Ahn Sung Ki is Korean actor's dream to work with. KHJ got advice and pointers on acting from him, I'm sure KHJ is still putting those pointers in practice.

Now about KHJ's performance in WGM or 'We Got Married', a variety show in Korean TV where they pair up celebrities and get them to pretend to be married. Kim Hyun Joong is paired with Hwang Bo as the 'younger man - older woman' couple, Hwang Bo being six year his senior. That is where most of us fell in love with the couple and totally fell for the charm of the 4-D shillang [groom]...at least ...I did. I watched BOF after WGM, and I'm soo glad. Truthfully, BOF would not have made that deep impression on me if I had not watched Joongbo in WGM first , 'course this is just my opinion [ They are called Joongbo couple, combination of their names] . 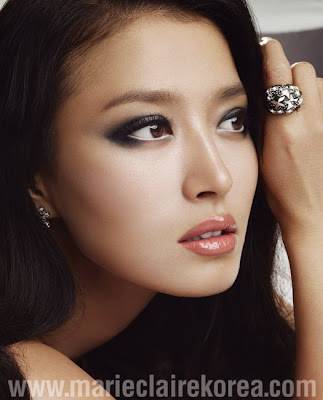 It's been said in the mass media that KHJ's performance in WGM with Hwang Bo...[and the huge interest and attention it got from viewers, no doubt] has been instrumental in the selection of Kim Hyun Joong for the role of Rui or Ji Hoo in F4. It seems a lot of blessings has come to KHJ through WGM, happiness in his relationship with Hwang Bo, rising popularity all through the program, and rising stardom in BOF after WGM. [If some of you don't know what I'm talking about...if you have time, please go and watch KHJ's performance in WGM !! you're missing a lot !! you could go to bb's blog or others and get the links, or go straight to U-tube, ust type Joongbo WGM, don't forget to get the English subbed ones :) ].

Video from U-tube by Michsann...a big thanks !

I'm a believer, and here's my contribution as a Joongboer. KJH admitted before shooting BOF, that as an actor - even though he had done Can Love Be Refilled - he is a beginner, he had not seriously studied acting before. But when he was chosen to play the F4 character of Ji Hoo, he started taking lessons regularly. Well, as you know WGM started long before BOF....so, if there's no spark of sincerity in his relationship with Buin or 'wife' in WGM, then what he said about being a beginner in acting is not true...coz then he sure "performed" convincingly in WGM , making us think they - Joongbo or Ssangchoo couple - were developing feelings for each other. In an interview I read [too bad I did not record the site's name sob sob] KHJ said that the episodes in WGM were not scripted, they were only given situations to develop on their own. When asked, he said : yes....he sometimes forgets there's a camera...immersed being Shillang or 'Kid Groom' to Hwang Buin. He also admitted to feeling as if he is really married to Hwang Buin sometimes.

Video from U-tube by Michsann, it's great..thanks !


And I do agree with others on the subject of 'there's SOMETHING going on' . I totally agree that towards the end Hwang Bo was getting defensive and tried to shy away from his advances...which had become bolder. Even KHJ said that Hwang Bo is getting mad [often?] because their relationship has become better [closer?]. And that song he sang for Hwang Bo for her Birthday...and the meaningful gift ......Ohhh ...me running out of words !! I'll let you be the judge your self , I've put 2 videos above, here...see for yourself..and in the two videos below....the eyes and the glances and the touches speak louder than words....and his gazes....ahhhh... his gazes !!!


Video from U-tube by ffjrebmaster, thanks a lot !!...love it.


Video from U-tube by Moelkr. Thank you so much, it's beautiful.

Oh, me tired !...I'll just have to continue in Third Dimension part 2 next time. I was planning on writting about KHJ in Boys Over Flowers, but this post will be too long and you'll all get bored. So till next time, and we'll talk about KHJ again and these beautiful people also : 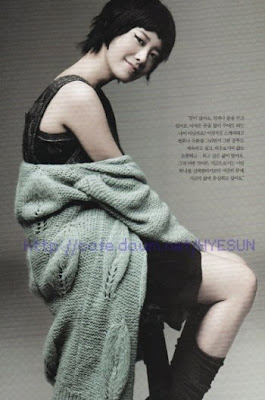 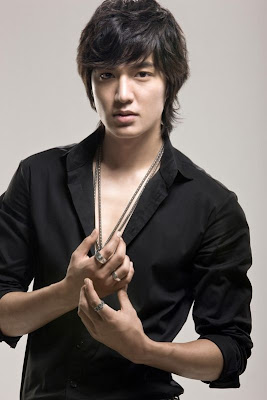 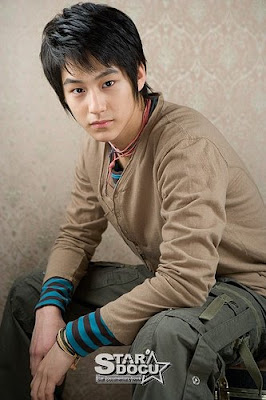 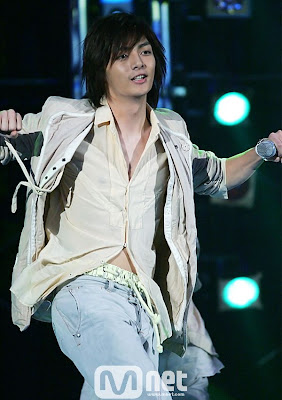 Pictures from the internet, credits as labelled.


He he he ...you'll see something which don't change,
in 'Can Love Be Refilled', 'Non Stop 5' and 'Boys Over Flowers' :
Kim Hyun Joong rides a motorcycle :)